You are here: Home / Order / Time Management / I’m Late! I’m Late!
This post may contain affiliate links which won't change your price but will share some commission. 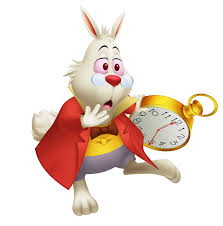 Remember the White Rabbit from Alice in Wonderland?

It’s a problem we ADDers have because we have such a poor sense of time passing and we are easily distracted.

I’ve gotten much better over the years but I used to be late all the time. Sometimes I’d even show up on the wrong day or the wrong week.

My daughter Caitlin is notorious for being late. So was Elizabeth Taylor. In fact, she was late so often that she had it written into her will that her funeral would start later than scheduled. 😉

If you find yourself constantly rushing to get somewhere before it’s too late, I have some tips for you.

Don’t assume that you know how long it will take to get there. Unless this is a route you drive every single day, you probably don’t have a realistic idea of how long the drive is, and that doesn’t take things like traffic and the weather into account. Do a search online for a starting time. And if it’s something really important, drive it at least once a day or two in advance.

Don’t assume that you know where you’re going. I’ve been known to get lost or turned around going someplace I’ve been to more than once. At the very least, have your cell phone or something handy just in case.

Allow yourself plenty of time to get ready. If this is something important, get everything you need the night before and lay it out somewhere. That includes things like shoes, coats, and keys. Also, don’t assume that you know how long you take to get ready. Think you’re jumping into the shower and then out 10 minutes later? Better check to be sure.

Get rid of distractions. Turn off the TV and put your cell phone on silent. Close the computer. Tell anyone around you that you need to get ready and then do it.

Make a habit of keeping your car ready to go. That means not letting the tank get more than half empty before you fill it up and keeping up with regular maintenance.

Remain calm. Rushing around like a crazy person won’t help things at all. It will just stress you out and possibly make you forget something.

Take a look at what’s making you late. If you’re chronically late, especially if it’s to the same place, take a good look at what’s happening there. If you hate your job and you’re always late to work, it’s time to do some thinking about that.

Consider others. Your lateness sends a signal to others that your time is more important than theirs. That may or may not be true, but it’s disrespectful. If you’re spending time with someone you don’t like or respect, why? At the very least, call ahead (make sure you have the number) and let them know you’re running late and be sure to apologize.

You won’t turn into Miss Punctuality overnight – you may never turn into her – but making a sincere effort and keeping it up will help.

I am an ADHD Expert, Coach, and Consultant. I want you to learn how to celebrate your life with ADHD too.

« The Art of Procrastination
Get Your Clean On »

Tell me what you think! Cancel reply

We are a participant in the Amazon Services LLC Associates Program, an affiliate advertising program designed to provide a means for us to earn fees by linking to Amazon.com and affiliated sites.